3D printed video game guns are a big thing among video game players and cosplayers. Playing soldiers has never been more fun than now. Especially, when there’s so much inspiration to take from popular video game worlds.

Either used a costume prop or just as a piece of one’s collection, these 3D printed guns from video games are totally worth the time and effort invested in creating them.

As you probably already know, creating a video game item for 3D printing is not as easy as it seems. Therefore, these cool creations and replicas have made our list of 10 most impressive 3D printed video game guns.

Acrus rifle is a cannon featured in the Destiny video game. The print is an order for Fabbdea 3D printing from Jay, a Destiny’s fan.

As a 3D printing enthusiast himself, Adam of Fabbdea has quickly agreed to honor this special order and set to work on the cannon design. The work was done easier thanks to the available preliminary STL generator at Destiny website. There was still work to be done, to make the piece 3D printable.

The Arcus Rifle for 3D printing counted around 40 parts which were printed in PLA material at 0.2mm layer height. After having been printed, all the parts had been sanded carefully, preparing the 3D model for painting. 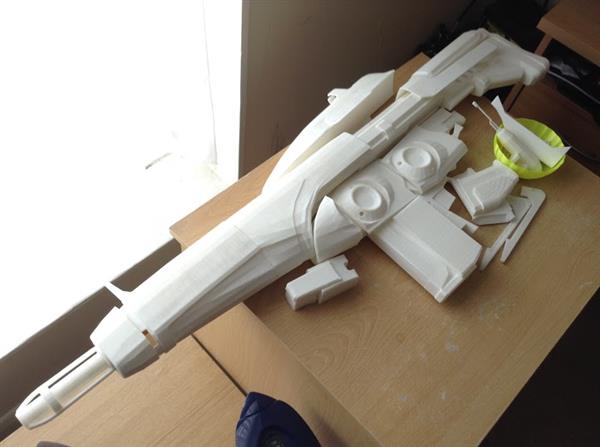 The Arcus Rifle 3D model for printing was painted with 3 coats of primer, 3 coats of paint, and 2 coats of lacquer. Then the model was assembled. Adam designed a removal magazine for the rifle, at Jay’s request. Speaker and LED lights were also added to the weapon. 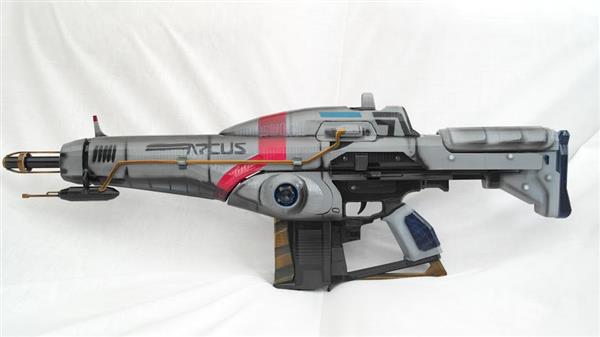 This is another Destiny video game weapon that has been reproduced with 3D printing. The Thunderlord 3D printed video game weapon is a 4+ feet long gun, printed in 3 different materials: PLA, Ninjaflex, and PLA/carbon fiber composite.

For the entire print, the designer used 2.5 kg of filament and about 196 hours of printer work. 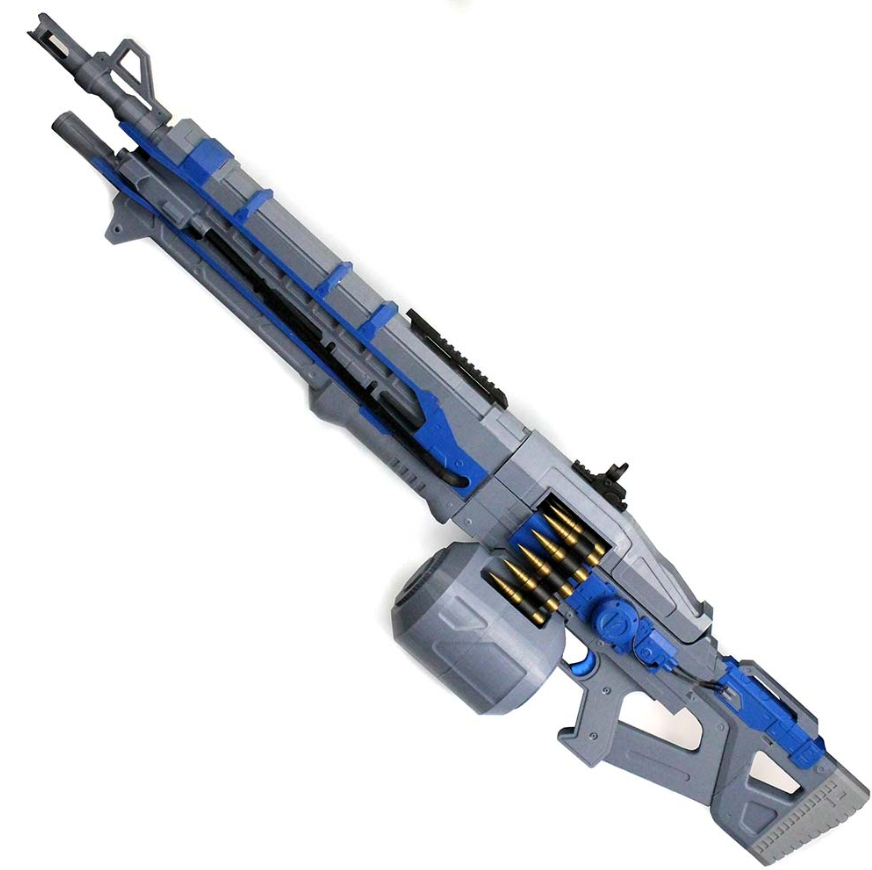 The design for Thuderlord weapon 3D model is available for free download at MyMiniFactory.

Yet, another Destiny video game gun that deserves to be featured in our top 10 3D printed video game guns. The weapon, known as the Gjallahorn is one of the classiest weapons in the game. The color palette of the gun, with black, gold and white, make it a royal weapon. 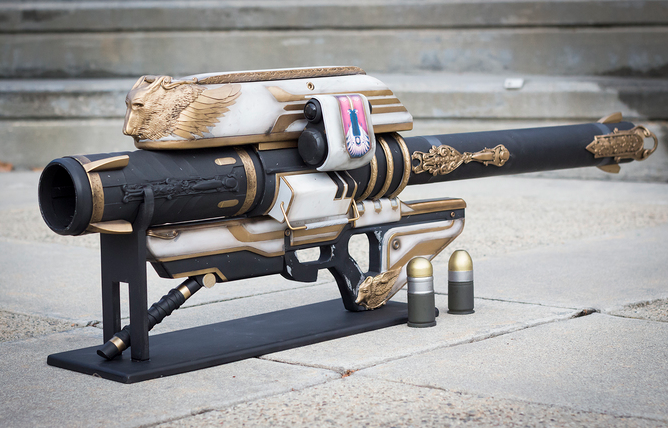 The Spike Rifle is a full-automatic weapon. It has a small drum with a 40-round capacity that feeds the weapon, located underside the weapon, in front of the trigger.

Its replica is made ready for 3D printing and made available for free download at MyMiniFactory. 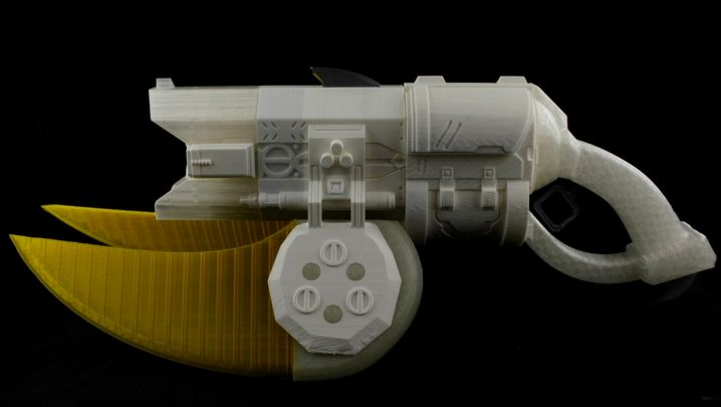 The 3D printing files of Spike Rifle are recommended to be printed at 0.2mm layer height and 8% infill. Even though its entire printing takes a lot of time, the effort is paid off by an incredibly detailed 3D model.

Being one of the most popular video game out there, Destiny has provided inspiration for the creation of numerous props for cosplayers, and not only, around the world. This time, it is about the Thorn gun that has been recreated for 3D printing by a man, called Brian Johnson. Although the props created by him are not actually 3D printed, he uses 3D printed molds to cast the resin product.

He created the Thorn Hand Cannon with the help from those at Vrogy Props, who modeled the gun, and Impact Props, who printed the mold. 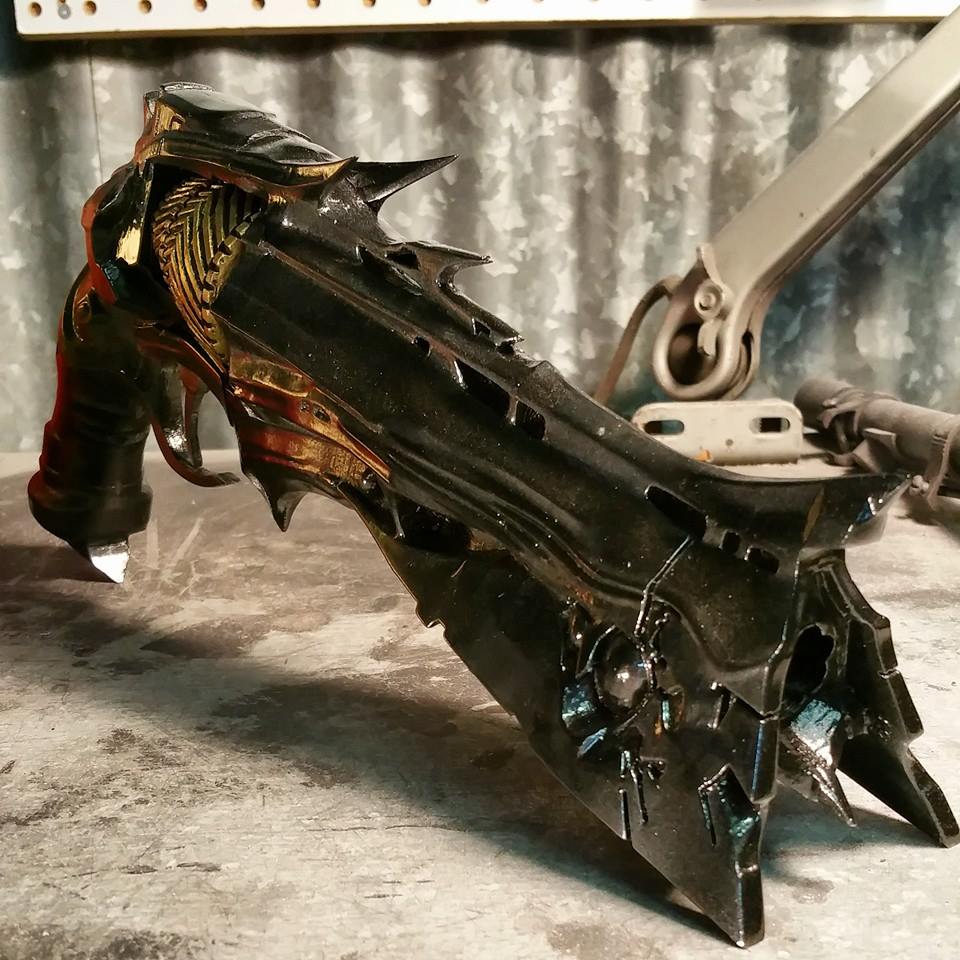 The weapon is hand painted, capturing the video game weapon’s colors and details.

Another incredible result of 3D printing and engineering is this operational handheld railgun, which is capable of shooting aluminum or graphite projectiles at 560mph. The railgun is provided with an electric circuit that, when functioning can deliver a speed of the projectile that is pretty impressive. Although, the handheld railgun cannot do any harm, the fact that it can shoot at this speed is already a great achievement for its creator.

Watch below the handheld railgun being tested:

As cosplay is the main activity that 3D printed video game guns are used in, it is not hard to guess that most players will turn to 3D printing when wanting to recreate a famous video game gun or even an entire costume.

This woman, Angela Simpson, has made the creation of cosplay items both its hobby and a source of income. She is being commissioned by people around the globe for her unique and customized items she models and prints on her own UP Plus 2 3D printer.

Here is one of her 3D printed guns. 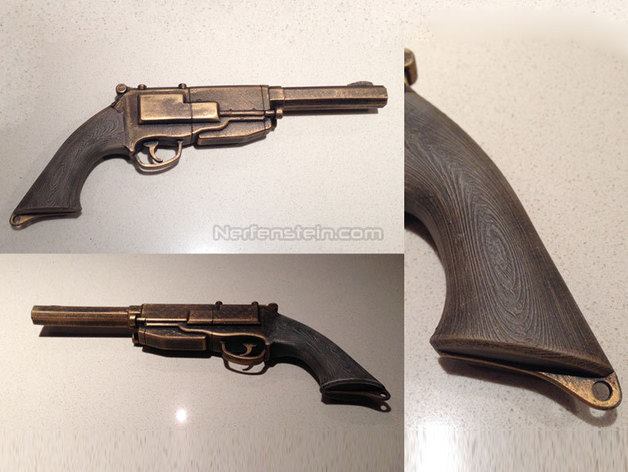 Fallout 4 is another very popular video game and inspiration for cosplayers. There are various items from this game created for 3D printing, from the hugely loved Pip-Boy to the power armor helmets and even power armor suits.

The 10mm pistol must be printed at 0.2mm layer height with 15% infill.

The files for the 3D printed pistol can be found at MyMiniFactory.

Recommended for you: Top 10 World of Warcraft 3D Models

Bad Juju rifle is a spectacular design gun that couldn’t be overlooked by cosplayers and 3D printing enthusiasts. Its in-game design, with the skull that emits stream of smoke from its eyes, makes it a special project for any true cosplayer.

So, it wasn’t long until the files for the rifle were uploaded on MyMiniFactory. 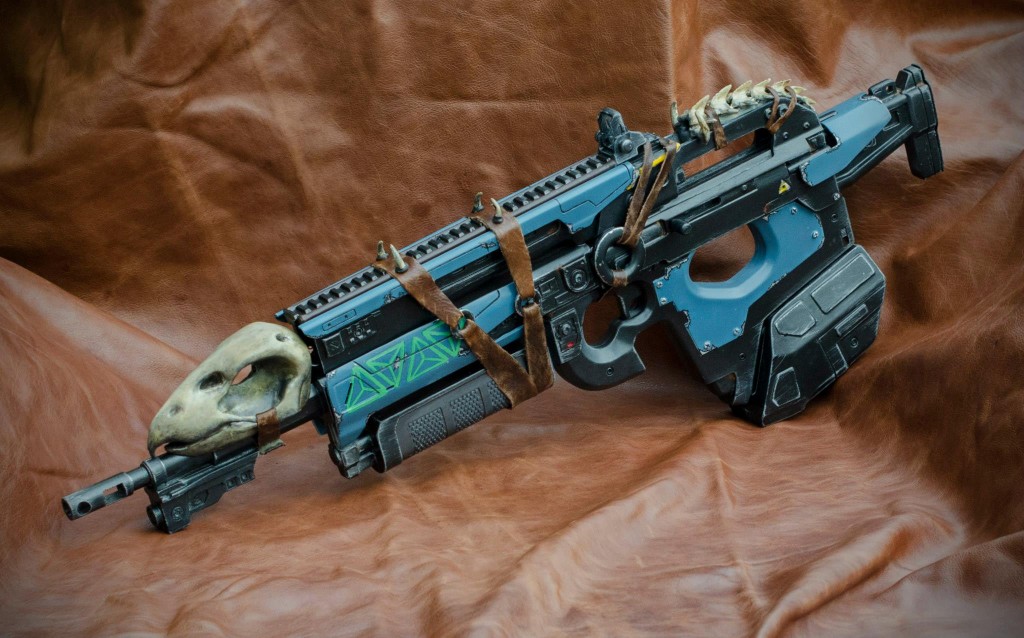 But it wasn’t until a cosplay amateur printed and painted the model. He used lacquer spray paints, acrylic dry brushing and airbrushing techniques to paint the rifle. Also, as a final touch, the amateur handcrafted leather parts.

This close-range blaster is recreated for 3D printing in several separate parts. It has a compartment for a built-in speaker and a red laser. 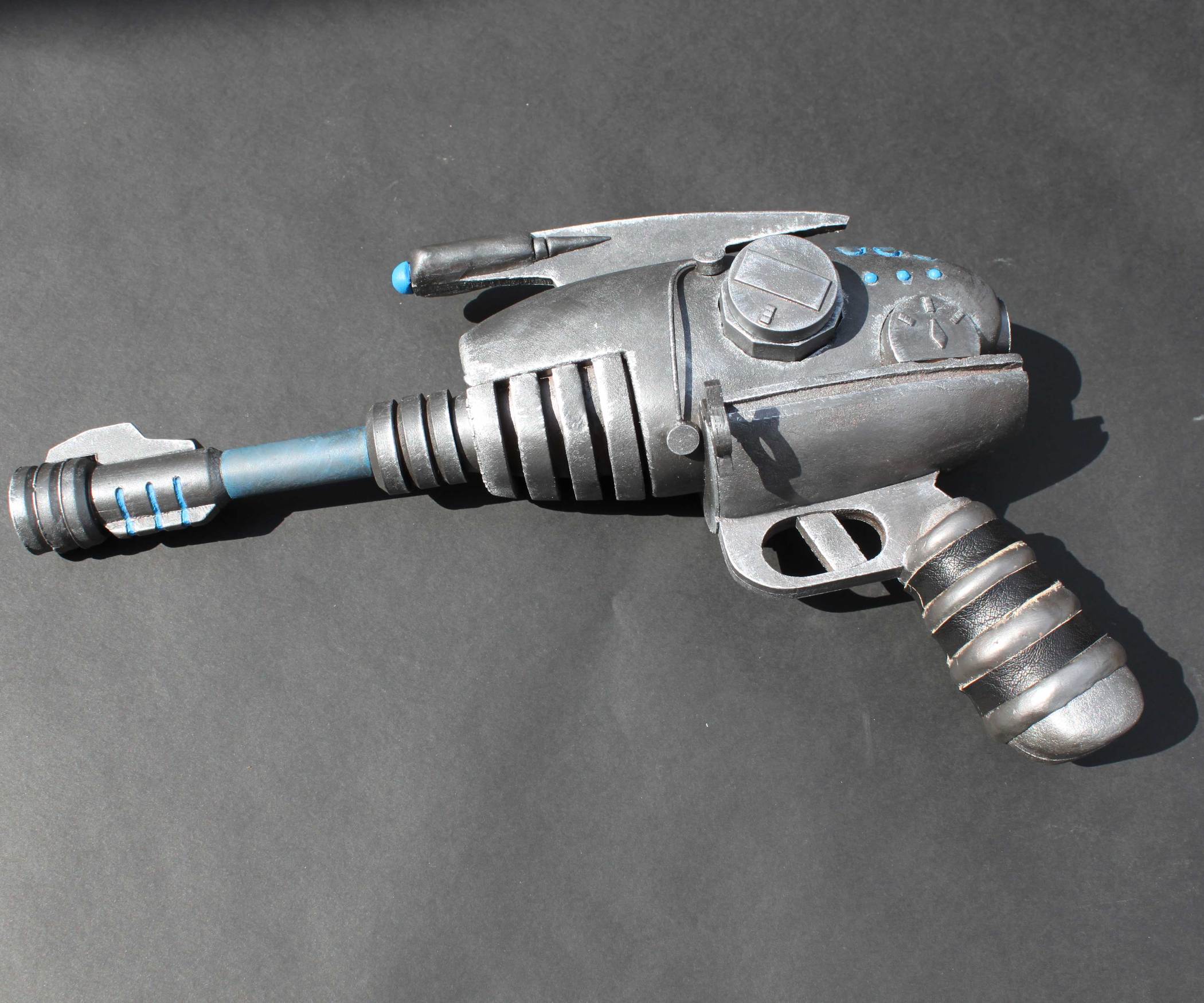 The 3D printing weapon files can be downloaded here.

Whether you’re a cosplayer or a video game player who is crazy about the guns in the game, these 10 3D printed video game guns are to dream of.