There are never too many MechWarrior toys to show and bragging about 3D printing another one is no sin. It’s actually a must in our Facebook Group. Here you can admire all the 3D prints that come fresh from the 3D printer’s heat bed every day or week. Sharing a passion and a hobby with hundreds of people is magical. Join us for a daily overdose of 3D prints, recommendations on printer setups and materials to have your miniatures just the way you imagine them.

This showdown is about Mechs, as there hasn’t been a similar one in ages, I mean come on, guys, who are we kidding?! Just check this post’s publishing date and you will take my side when I’m saying that there’s been a long fasting period.

And just to make it up to you, we have gathered a nice list of incredibly and amazingly 3D printed Mechs from the BattleTech Universe that have recently “spammed” the wall of our Facebook group. Some of them are featured several times but we couldn’t leave them out, as our, every customer’s effort is important to us.

You can find the STL files for these bipedal robots at the premium 3D printing marketplace Gambody.

Mad Cat has become a classic. Customers prefer it due to its V-shaped position and the intrinsic details it showcases. There’s also a weapon kit for it. You can 3D print it and mount it on your regular Mad Cat Mk II to upgrade it. 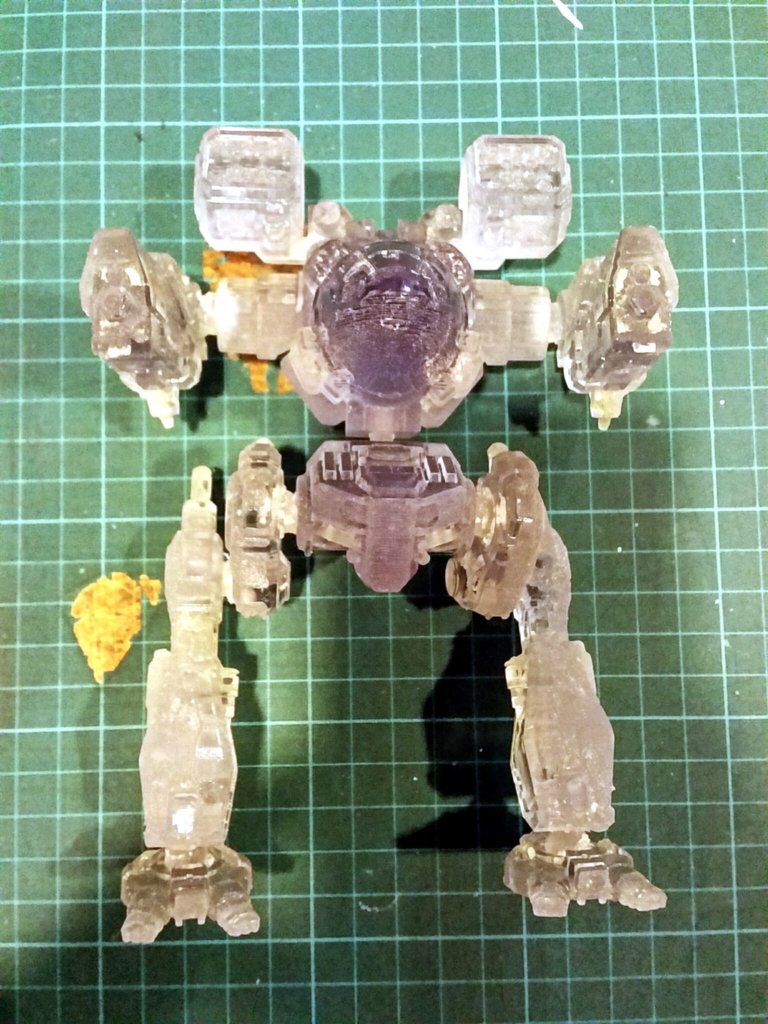 Rifleman was designed as a fire-support machine. Unfortunately, it had a lot of flaws and couldn’t live up to its designers’ expectations for a long time. It underwent a lot of modifications and upgrades until it finally found its place on the battlefield.

The replica is printed in PLA at 100 microns on a Replicator 2X and 5th Gen using Hatchbox by Alwin Chan. 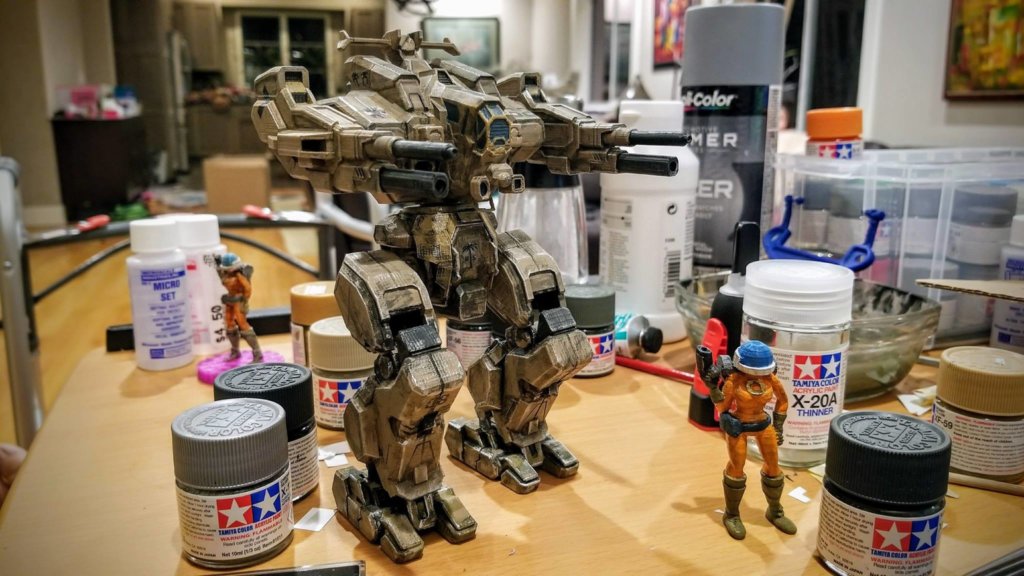 Marauder looks resemble more those of a bipedal robot as compared to its brothers’ more humanoid looks. Regardless, the Battletech Universe Mech has been designed to take over the role of fire support. Featuring joints for extra movability, Marauder is a dream for any BattleTech Universe fan.

And this dream became true to Enrico Maria Barbieri. He 3D printed the beast, taking him about 10 days to complete it on a Tevo Blackwidow PLA 1.75. at 100% scale. 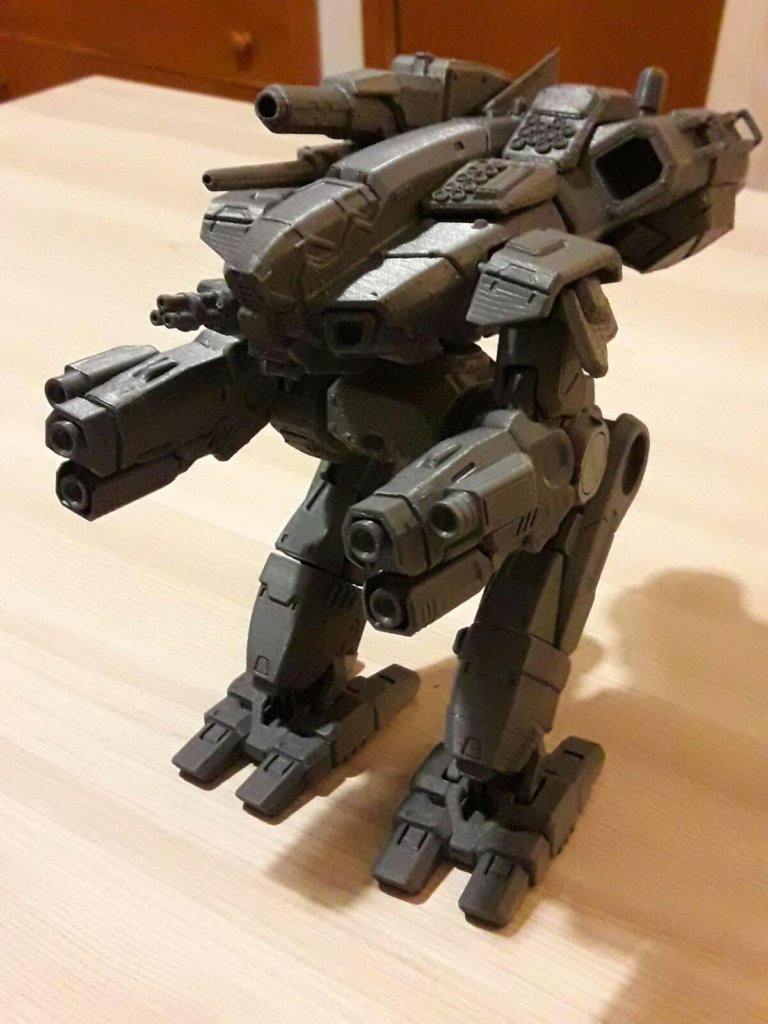 Here’s another one, already painted. Kudos to rkd_studio.

TimberWolf MechWarrior Figurine one has won silver at Gen Con Convention. For those who don’t know, Gen Con is a convention with several events that take place every year and is targeted at gaming fans.

Kevin Witt, the maker and the silver prize winner of this year’s competition, participated with his 3D printed and painted TimberWolf, created from the files available for purchase here (link to files) at Gambody. We were so excited when Kevin wrote us to tell that he won silver at Gen Con that we couldn’t let him escape without pouring out all the details. You can read an interview we conducted with him here. 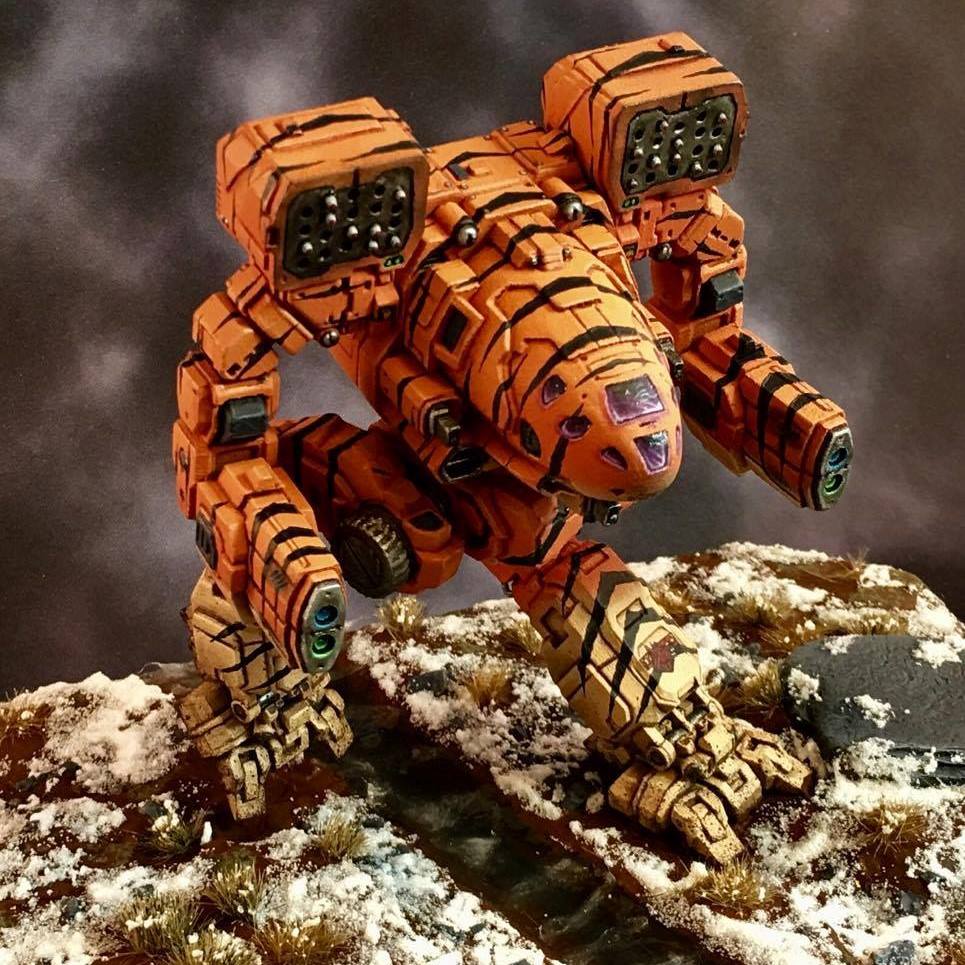 This Timberwolf is similar in shape but different in colour with the previous one. Just another proof that 3D printing means you can have one and the same 3D model, but every time different.

MW Mun has also 3D printed a TimberWolf. He mixed ABS and PLA to build this one.

You most probably remember the blue-hued Atlas Mechwarrior figurine Gambody released last year this time, right? If you don’t, head here to read about it and see lots of pictures.

Rob Lyon’s Atlas comes in green colour and impresses with its attitude. The skull-coloured head is really terrifying if you look closer. 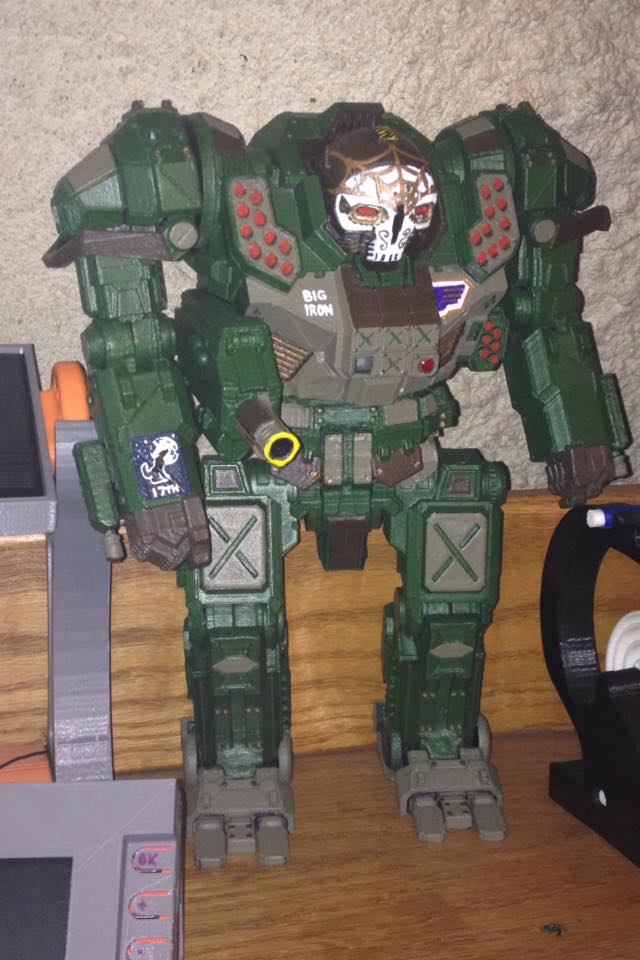 We were just wondering in the office, what colour would a girl pick to paint Atlas if she were to 3D print one? Any ideas!?

Alexei Bruton has never disappointed us. He was the MechWarrior trendsetter and he doesn’t cease to amaze us everytime he posts a picture of his yet another awe-inspiring 3D print.

Anything to add? We don’t think so. 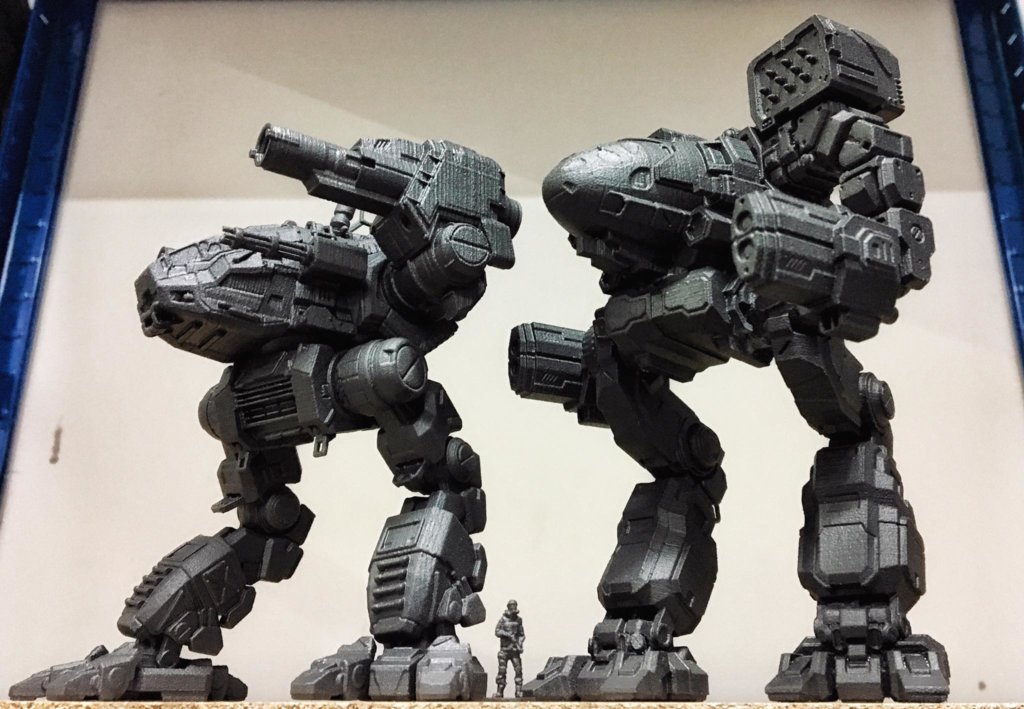 King Crab figurine is also from Alexei Bruton and it shows the Mech next to a 28 mm tall miniature. King Crab is 3D printed in Graphite reinforced SLS Nylon. What can we say? This guy knows how to treat a MechWarrior! 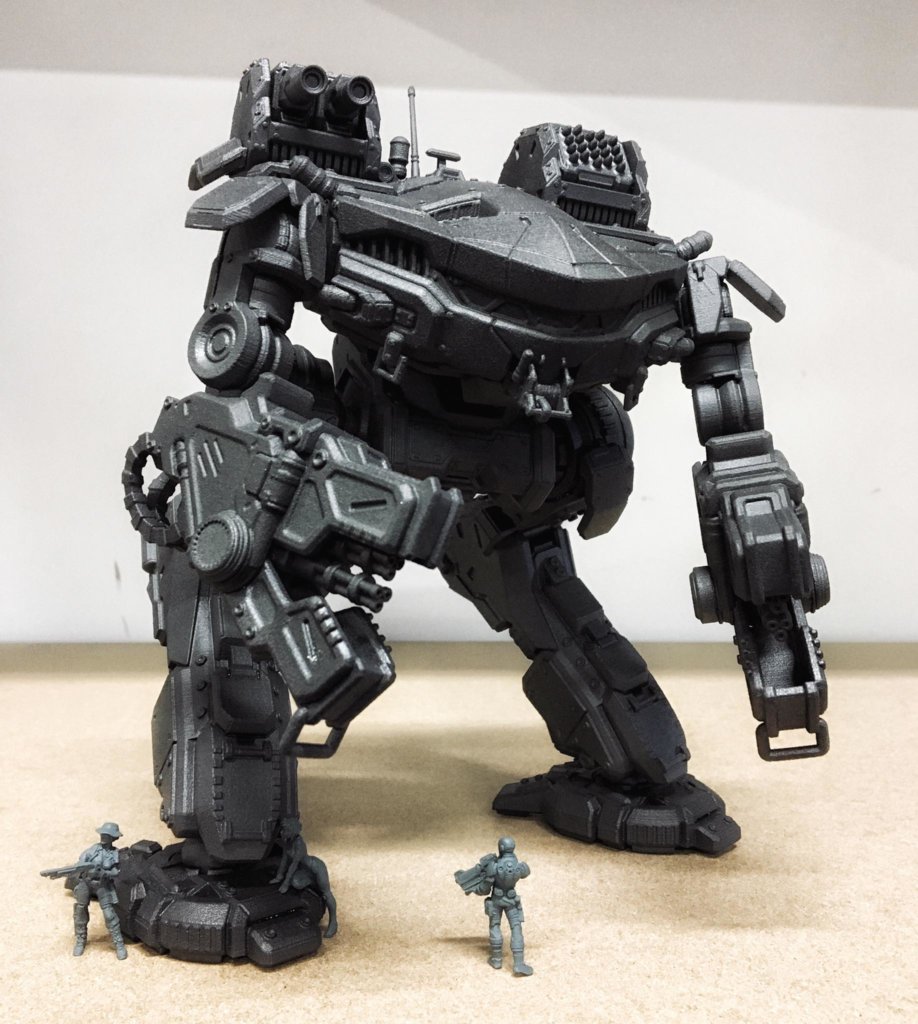 Catapult brings nostalgia to us because the MechWarrior craziness started with this fella. We believe that even five years from now people will 3D print it and every time it will look different. 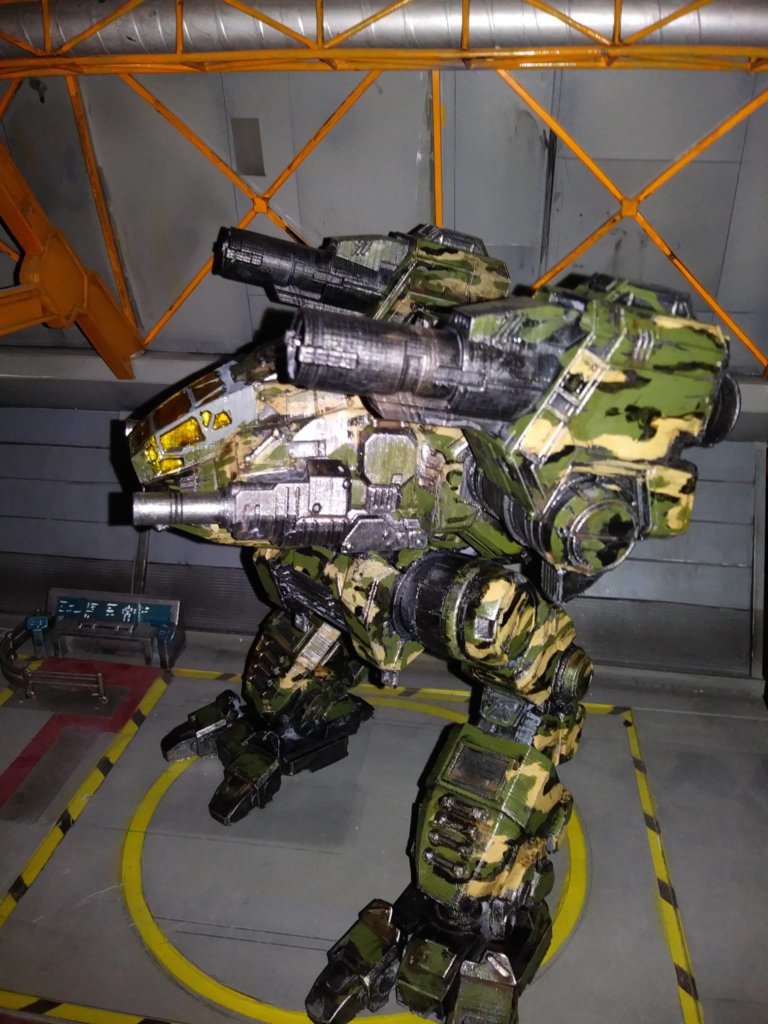 The bulky MechWarrior miniature is also known by the name Thor. This war machine will not disappoint in battle. Equipped with LB 10-X Autocannon and LRM-15 launcher and can develop really high speed.

We don’t see Summoner in its physical form too often. That’s why this Mech figurine awed us. Have a look! 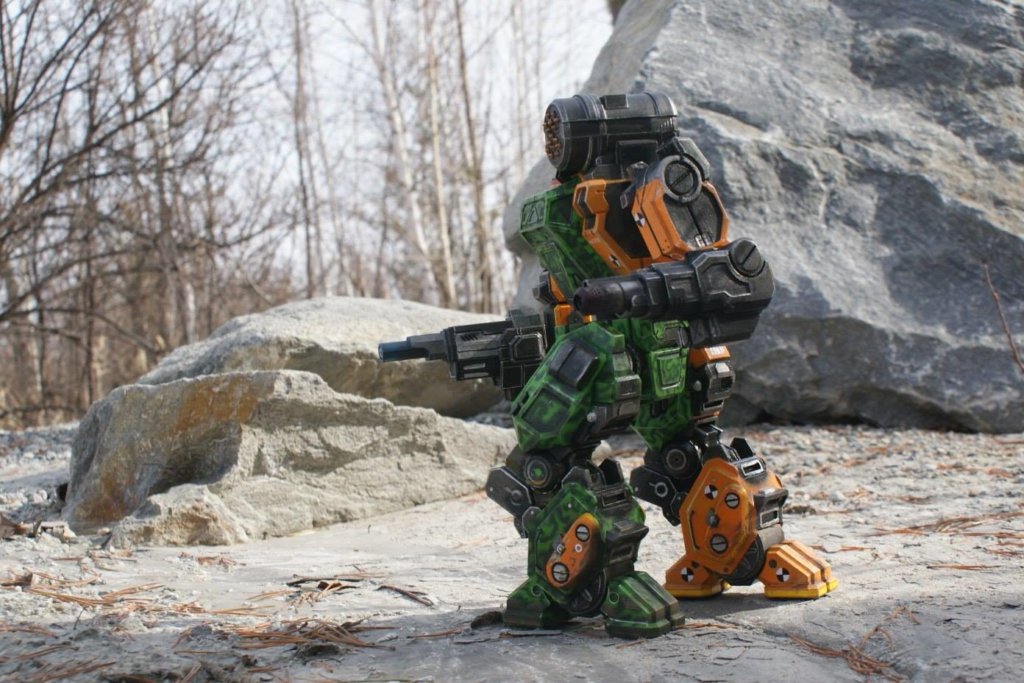 Scott showcased his entire collection of MechWarrior figurines in one single post in our Facebook group. All bipedal machines are 3D printed and painted by Scott himself. As a true MechWarrior fan, Scott didn’t mind the long time it took him to complete all of his new friends. You shouldn’t mind, either. It is worth every second of your 3D printer’s work.

Jenner Mech is a member of light class of Mechs. Due to this, Jenner is one of the fastest Mechs, developing a speed of up to 118 km/h. Of course, this agile Mech can bring its contribution to the battlefield thanks to its armament.

If you are curious to see it printed, see the results that João Campos Costa got. 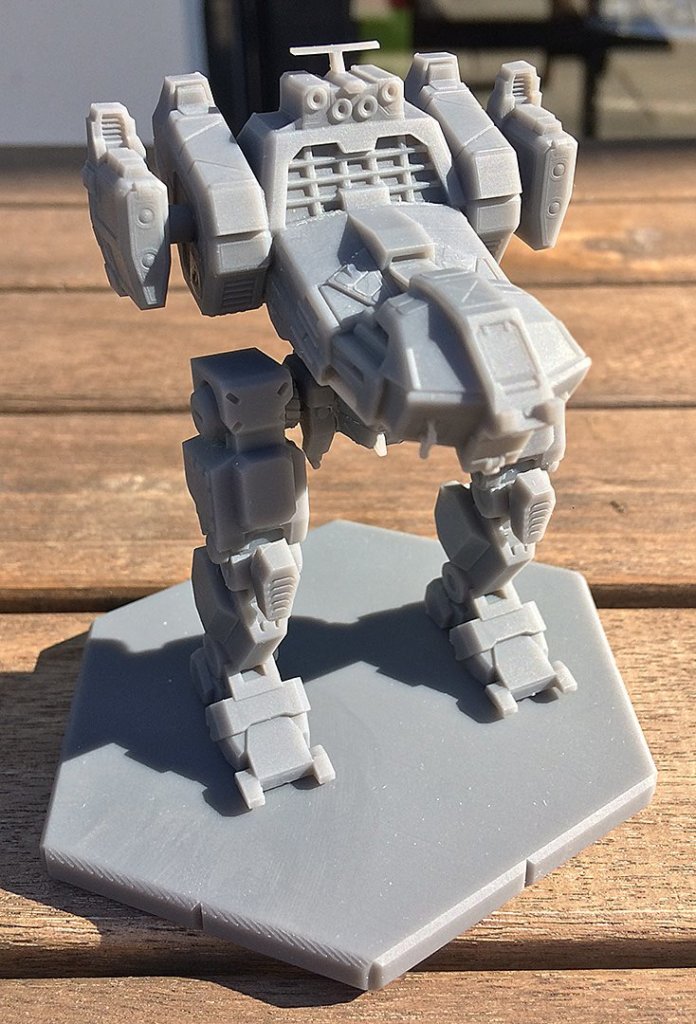 That’s it for now. We will be showcasing other 3D printing models as soon as they are shared by you. Don’t be shy to share them because Gambody rewards each and every one of you by giving you the chance to redeem 50% of the model’s price. How does this work? Click here for more details.