DOTA 2 is an action free-to-play game, played both professionally and casually by millions of fans worldwide. Recently the greatest DOTA 2 related event has ended – The International tournament. Sixteen teams competed for an exorbitant prize pool of $20,770,460. The winning team took home $9.1 million.

Due to its huge popularity among gamers, it isn’t a surprise that people have turned to 3D printing technology to have their favorite character in physical form.

This list of DOTA 2 3D models is not exhaustive and the models are featured randomly. DOTA 2 fans, you can find 3D printing files of props, characters, and other in-game content for your own entertainment in the real world.

The 3D printed content will allow you to create your own Dota2-inspired table top game.

This user has created the OBJ files and handed them to Sculpteo to print. He shares a detailed process on how to extract your model from the game and export it into OBJ file here.

The Faceless Void character is 3D printed in multicolor material and the result is pretty awesome, don’t you think? 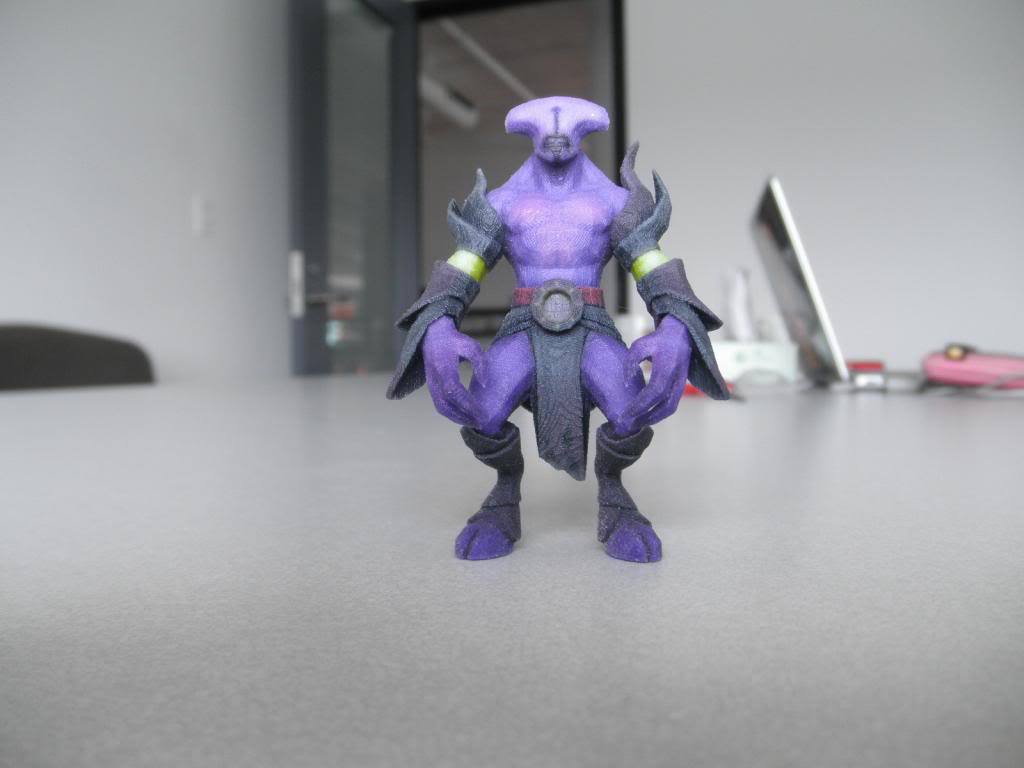 DOTA 2 fans are keen to share their creations with other gamers. This user created and 3D printed the Rubick character. The 3D model was printed in ABS using support for overhang elements. To handle the support removal in an easy fashion, the user made use of dissolvable support material. 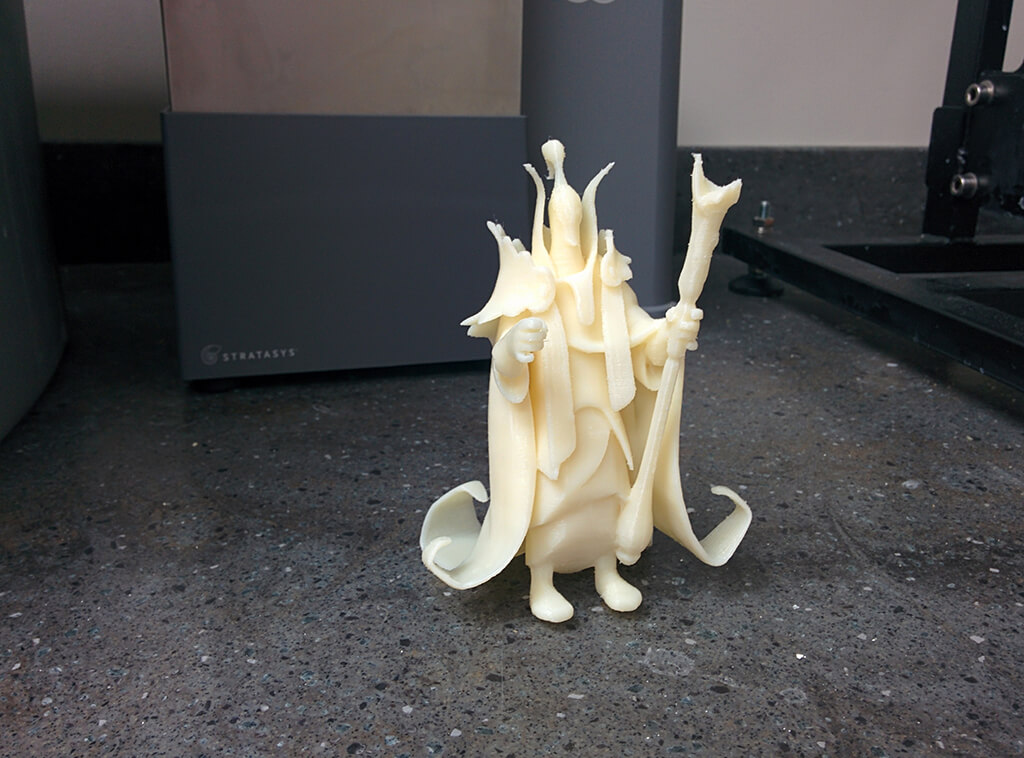 Here you can see more pictures of the model and its printing and cleaning process.

Pudge is another ferocious and ugly creature that dwells in the DOTA 2 universe. In the game, he is also known as the Butcher, thanks to his ability to handle his Meat Hook and for his thirst for blood.

The 3D model of Pudge video game character has got a lot of adjustments and optimizations for 3D printing. The single STL file is created in Maya 3D modeling program and can be easily handled in any 3D slicing program, before sending it to print.

The Butcher 3D model features all the signatures features of the in-game character. 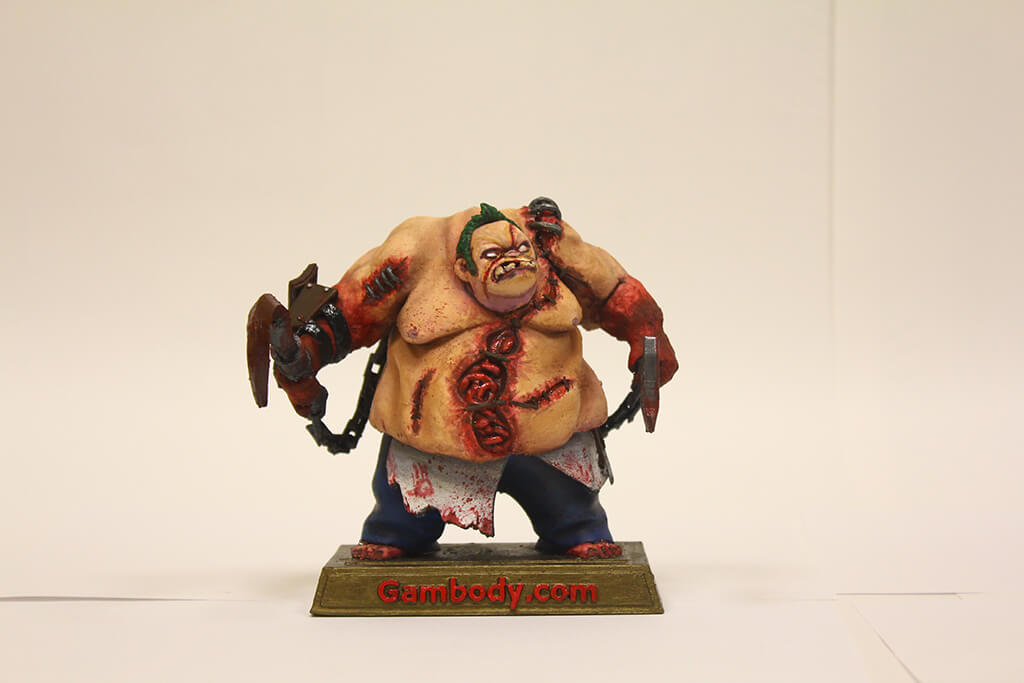 Pudge 3D model STL file is up for sale on Gambody.

Roshan, also known as the Roshan the Immortal, is the most powerful creep of the game. He easily fights off any enemy in one on one combat. 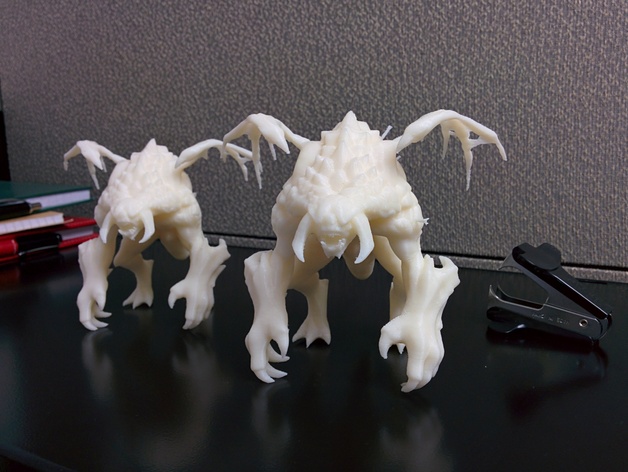 The video game character is available for 3D printing both in low- and high-poly form. The DOTA 2 Roshan 3D model is 3D printed in white nylon. The model was printed at 0.2 mm layer height. The entire printing took about 24 hours and other 2 hours went into removing support and cleaning the model.

DOTA 2 is full of ferocious characters. Doom is one of them. The character has lost his wings, remaining only with smoking stumps. Doom attacks without mercy, bringing hell to all those he sets his rage upon.

Doom 3D model has undergone both 3D printing and painting processes. The 3D model is optimally positioned and scaled. For outstanding results, the creator advises printing the model at higher resolution and at medium infill. 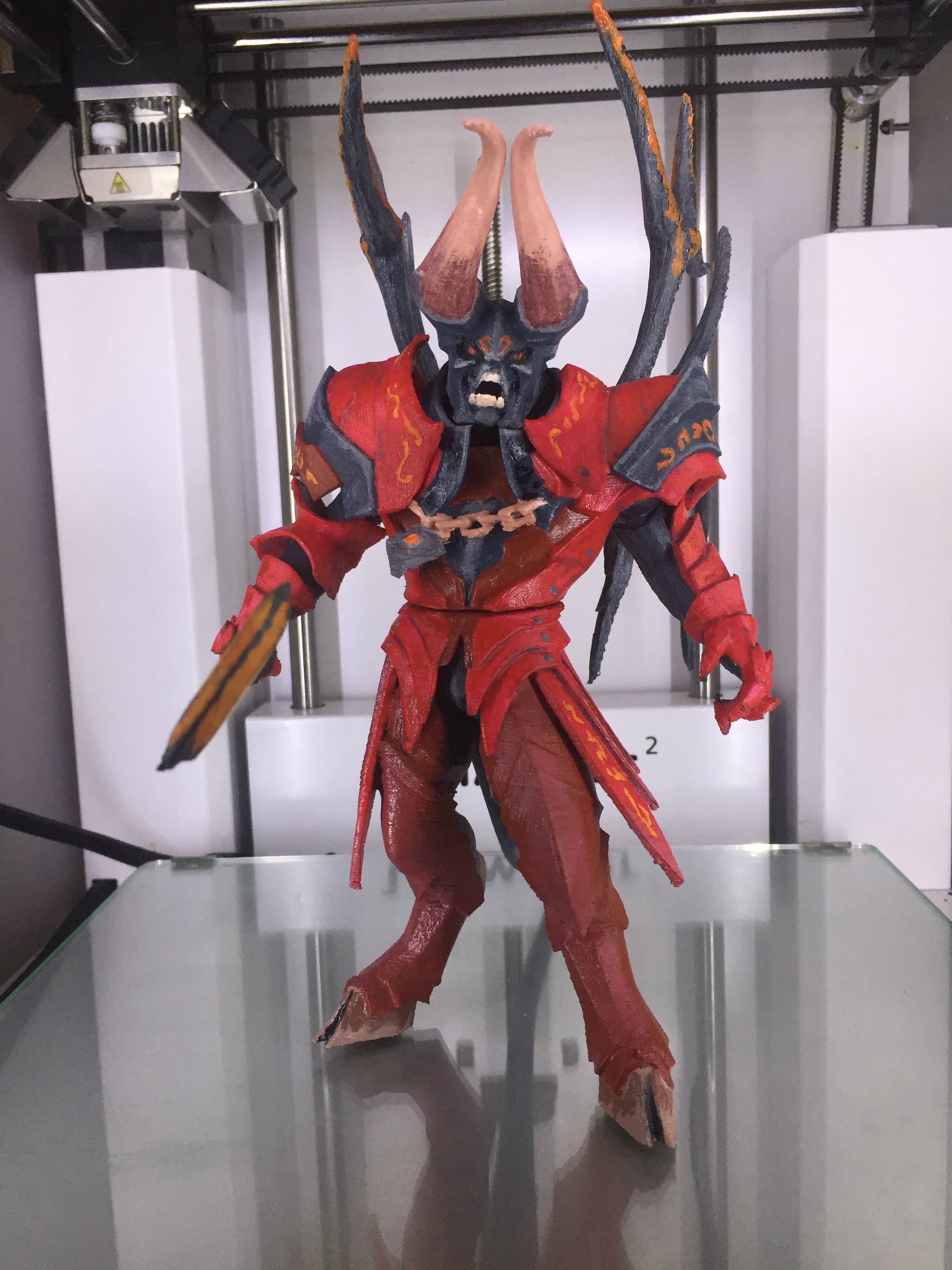 Download the files on Myminifactory and have fun creating your own Doom 3D printed character.

This creepy creature of Lifestealer has the ability to bring down durable heroes. He sucks the life out of his enemies. Every attack he is involved in, he consumes the flesh and the blood of his victim.

The Lifestealer 3D model file was created both MAYA and ZBrush at the same time. The model can be scaled up or down, depending on the user’s preferences. The file was checked in Netfabb and shows no errors. 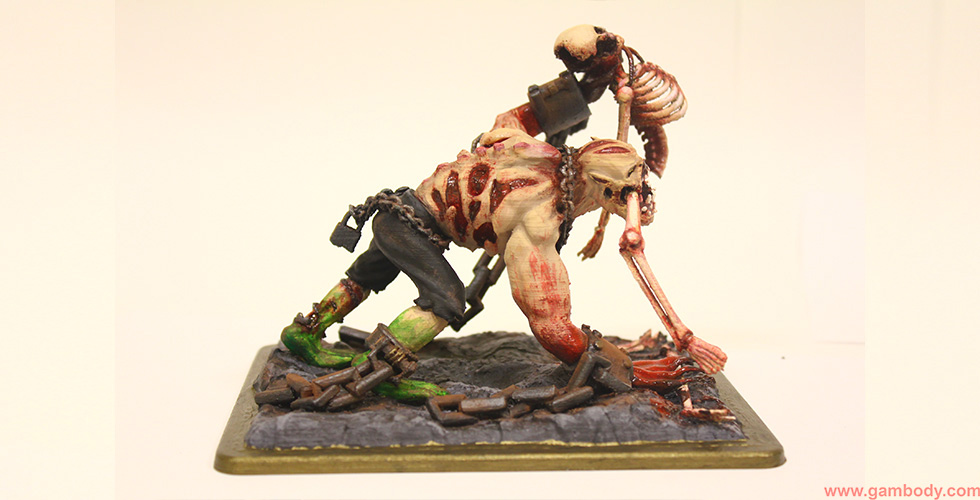 Riki from DOTA 2 is the single descendant of the royal family who escaped death the night his entire family was slaughtered. He escaped using his invisibility ability and the skill to cut quietly the throats of the enemy one after another. 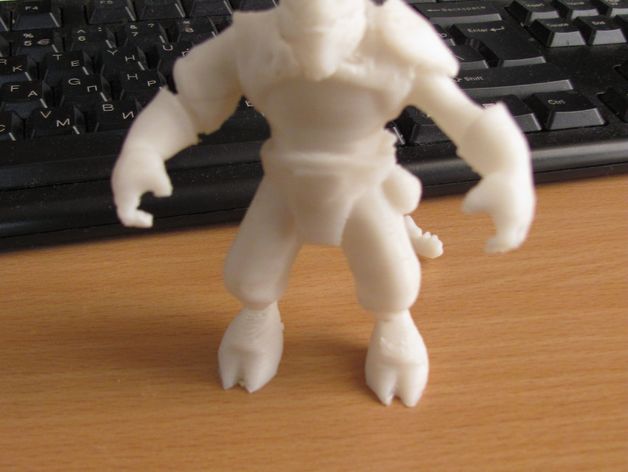 Riki model for 3D printing is a low-poly model. There are two files for printing, standing for Riki figurine and the dagger. The files are saved in STL format and are created by Tyrgore. You can download the files on Thingiverse.

He has never shown his face to anybody, hiding it behind the mask. He can skillfully handle his blades, involving his enemies in a bloody bladework, whenever attacking.

Juggernaut character for 3D printing is an action figure consisting of 4 separate parts. The parts must be assembled to build the 3D figure. The STL files for Juggernaut 3D model can be downloaded at Thingiverse. 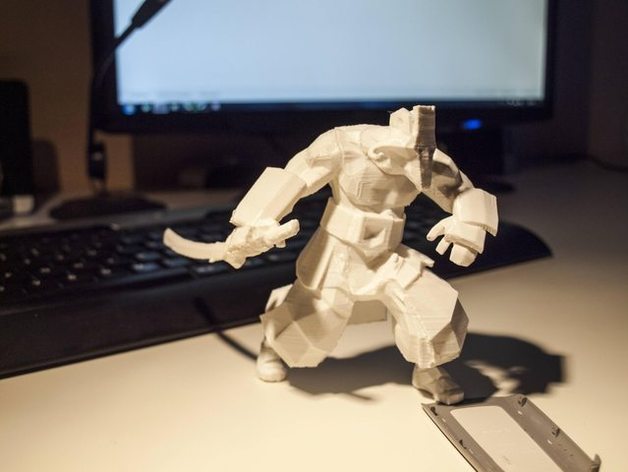 This versatile character takes the form of an arachnid. He has a ferocious nature, capable of causing damage outputs on large areas in the entire game.

Its 3D model for printing is an awesome representation of the in-game melee hero. It is an assembly 3D model, consisting of 8 separate parts. It is recommended to print the files at high resolution. 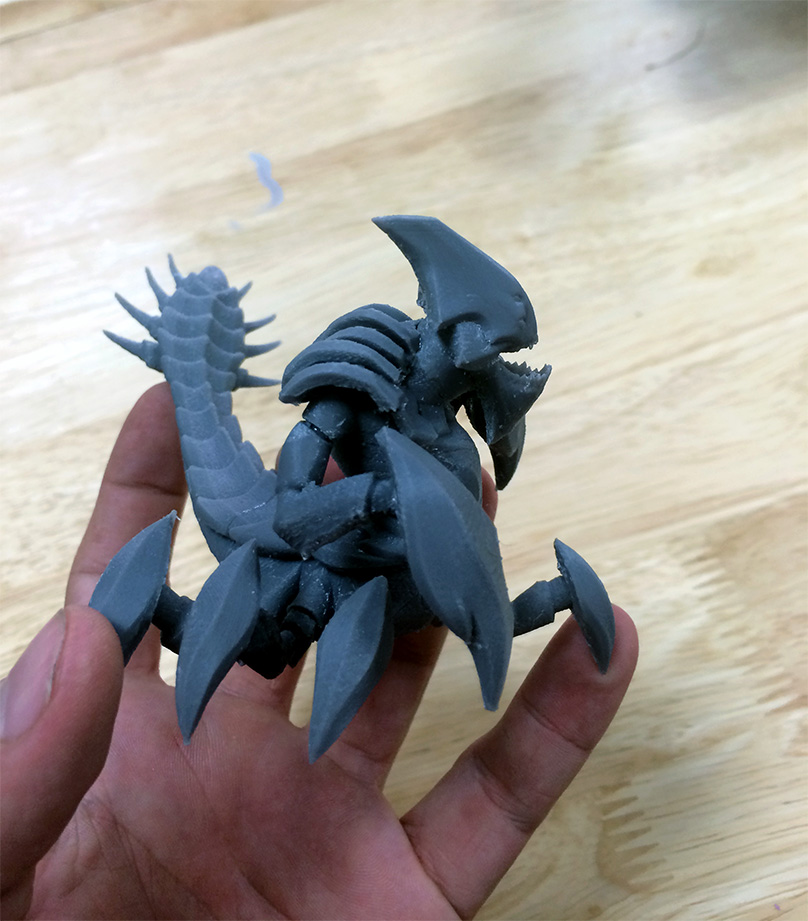 The files can be downloaded at Myminifactory.

Mogul Khan, or the Axe, has the role of an initiator, breaking the enemy’s formation and giving his team openings for the attacks. Axe is a very powerful and remorseless character. His style of fighting consists in getting closer to the enemies, attacking them. His thirst for blood can be read on his face and every friend or foe feels his rage on the battlefield.

Axe 3D model was modeled as a static video game miniature, stylized according to the game’s character. It is a single file 3D model, extracted in STL file format.

We printed the model for advertising purposes and quality check of the STL file. DOTA 2 Axe 3D model printed clean, in ABS material. After printing, the model stands about 10cm tall. 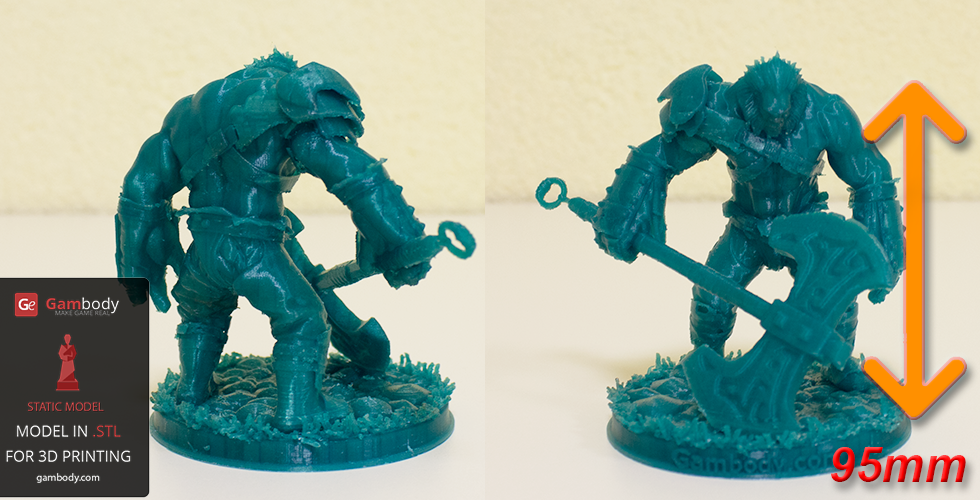 Get your impressive collection of DOTA 2 3D models. You can also turn to your old buddy, the computer and start modeling by yourself your own DOTA 2 stylized model. The advantage of this is that you can customize it as you like.

3D Printing Spaceships to Take You Far, Far Away…